You Can't Bottle Grief...or Your Creativity & What You Are Meant To Bring Into The World

After people die those left behind keep finding "pockets of grief".  It's been almost a year since my mother died.  Her funeral was the day of my first The Black Folder Workshop which was cancelled. Well, I haven't really put dedicated action and effort towards The Black Folder Project since her death...then...two things happened over the past two weeks:
My cousin asked something interesting. She asked when was I going to get back on this project and schedule another workshop. I told her soon since it was almost a year since my mother and her aunt had died.

She asked me if I were afraid that I might cry facilitating a workshop on this subject (since now my own grief of my mother's death is a part of the story of this project) and I immediately said NO.  When I said that I was thinking about when I went skydiving and also when I voluntarily got tasered to prove to myself that mind can overcome anything physical, even fear or pain.  I also could not imagine after all these years of meditating that I would not be able to control my emotions. 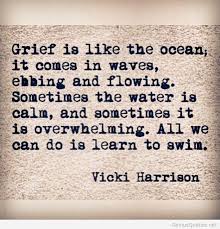 grown close to and how he broke down in tears and couldn't go on with the eulogy.  Her point was that sometimes expressing your emotions makes you real to people.  Sometimes you will get overcome by emotions and you don't know when that might happen.

So...on my list of things to finish this weekend was to put together The Black Folder Project Package. Something that I could offer without giving a workshop.  I'm proud to say that I have completed this task. The package includes:


I keep thinking I'm almost done. That's normal because it could always be better...continuous improvement...perfect.  But today, I'm forgetting about the perfect and just putting together what I have.  Shoot, tomorrow is not promised and I think people need to have a black folder.  I really do.  I'll put together a couple of packages.  I might even leave a little space on my table at an upcoming craft show in April.  I'll also add a shopping cart to this website, at this point, why not?

Then the next thing on my list - moving my craft stuff from inside back into the garage (since it's getting warm again) -  As I was doing that I flipped on the TV (I don't watch a lot of TV, so I'm always surprised by what comes on when I flip it on).  This song was on the country station..."Same Mistakes"...

Another Confirmation To Put It Out There...Well World Here Comes The Black Folder Project...Ready or Not...