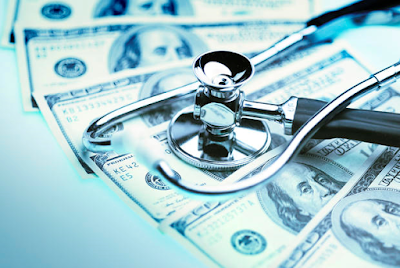 for the Biopsy.  I'm thinking that is a mistake bill, before insurance is applied.  How on earth do people without insurance afford to live when they are diagnosed with cancer?  I just don't know.

Made a follow-up appointment with the surgeon.  I was told to make this appointment two weeks after port placement.  Now, typically I would NOT have followed-up.  I just do not like first being told what to do, and second I think it's always just about "more money".  I decided to go through this process as it is being prescribed to me.

I get to the appointment and when I check in they do not ask me for the $40 co-pay. Okay.  I get back to the room and the surgeon looks at the port placement, said it looked good, asked if I'd had chemo treatment yet.

I asked him how small the tumor had to get in order for him to do a lumpectomy.  He looks at the size from the mammogram 62mm and then what he measured 6x6 and then the MRI 51x57x53. Then he looks at the chemicals that the Oncologist has me on for Chemo.  I have my "cancer info book" I keep in my purse. I write these numbers down and am waiting for the size it needs to shrink to....pen in hand...waiting...I'm looking at the surgeons shoes because they look like very expensive yet look like comfortable shoes.  As I'm looking at his shoes he pivots from the computer screen and turns to me and says: "We want it to go away".  As he said it I began to write and then just started laughing and said..."I'm going to meditate on that!"  He said yes, that is the goal that it will not only shrink but disappear.

I just sat there in a state of elation.  What if that could happen?  What if?


I leave the surgeons office and head to my second round of Chemo.

I asked my son not to come because they told me I would not be getting infused with Benadryl and it would be less Chemo drugs this time.  Honestly I just wanted to see how it would be going it alone.

My white blood cell count was low, but not too low to get the treatment.  I took a book and I colored a picture. There was a new crop of people in the chairs.  It is soooooo sad.  Cancer/Chemo is sad.  There were two ladies who had to go home with some type of infusion pump on their waist.  Something that needed batteries.  I thought...okay it could be worse..I could have to take something home with me.  At least I get it done in one day and only have to deal with it once a week. I now count that as a blessing.