Now that I am "hooked" into the medical "system" I've decided to embrace it.  Meaning I will follow-up with all the appointments I've been asked to go to.  Typically I would not do this because I've felt it is unnecessarily giving the medical "system" money.  But...no just go through the process is what I'm thinking. Embrace the Suck!


I made and went to my follow-up appointment with the Oncologist.  I had to go to another office - Hampton Office versus Port Warwick Office.  Immediately I saw the difference.  It was just different.  Didn't feel as upscale.  I guess that is what I would say.  It was smaller.

Met with the doctor and she said I looked great.  Somehow that shocked me...I still had my hair but it was basically just sitting on my head at that point.  If I put my hand through it my hair would come out, so I didn't do that.  I could just sit there and pull my hair out in chunks, but I decided to just keep the hair sitting dead on the top of my head as long as I could.

The doctor and I talked about that the tumor was shrinking considerably.

She examined me and agreed that the treatments were working.  She let me know that the treatment plan could change based upon how my body handled them.  She also told me that maybe 4% of folks get sick/hospitalized because of low white blood count.  It was serious but not many folks end up hospitalized. She told me her and nurse Brenda where in constant contact about my care and all will be fine.  I believed her.  We hugged each other. She told me to make an appointment in three weeks.  I did before I left her office.

I left the doctors office and went to the wig shop.  I had brought a wig about a month ago and didn't really like it.  It was human hair but I just didn't like it.  I went to another wig shop and found three wigs that I liked.  They were synthetic hair so basically just put it on and go...and they were half the price of the natural hair wigs...only $30 each and I got a discount because I brought more than one.  I walked out of the wig shop and put one on and then went out to lunch with a friend.


My son went with me to this appointment because it was the longer day with more drugs.
Breast Cancer Treatment for "Trible Negative" is 4 cycle of 3 weeks = 12 weeks.  Week 1 of the  cycle is the long day with 2 chemo drugs and many pre-drugs. Weeks 2 and 3 is only 1 chemo drug and less pre-drugs.

I wasn't sure I would be given the treatment this week because last week my white blood cells were too low for the treatment but the doctor wanted me to go ahead with it and skip this week if the counts were still too low.

When we get to the treatment center it was packed...only one seat left and we had to look for a side chair for my son. I just kept thinking about ALL THE MONEY sitting here in these lazy boy chairs.

After buying the wig I started pulling and cutting my hair out, so now I had to wear something on my head, so I wore my wig to the treatment.

My treatment nurse, Brenda told me she liked my wig and then got me all hooked up and took my blood.  She came back with the results and my counts all came up so the treatment was on. She gave me the Benadryl which I knew would knock me out, and it did. Then the pre-drugs started. Then the 2 chemo drugs. A process. With each Chemo drug she would ask me to tell her if I felt any different.  I didn't have any effects except I was sleepy.

Some of the same folks from last week were there and there was few new people. Somehow it is the same type of look on people's face.  Trying to make the best of it.  Trying to smile when you want to cry.  Far away stares every now and again.  Sleepy eyes. It's almost like you know you are here, but can't believe you are here.  You want it to end, but know it will end when it ends. 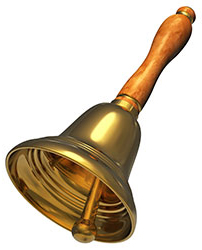 A bell rang and the nurse announced...this is the last chemo treatment. Everyone looked up and clapped for the person standing near the bell.  There is an end!!! Hearing that bell ring is the end of part of the process! It reminded me of where I work there is a bell that people ring when they are walking out the door for retirement. As I sit here out of work I think about ringing bells.  Why do people ring a bell to make an end to something?  I feel like maybe there is something to that.  Should we ring our own bell everyday.  Ring a bell that you are alive. Ring a bell that you've survived.  Ring a bell to wake the hell up.  I mean really...ring a bell...