November 2019 Getting a Cold, Fainting,Emergency Room


The Sunday before Thanksgiving I got a cold.  As the week went on it turned into a bad cold.  I was congested and coughing day and night.  I had already decided not to go to Atlanta for Thanksgiving and THANK THE ALMIGHTY GOD that I did. I was very sick and weak.  In the bed and not moving much. I had decided to try Whole Foods for Thanksgiving Dinner.  I was exhausted when I picked the meal up.  I had NO desire to eat any of it...let alone warm it up...and I didn't.  Thanksgiving came and went and David brought me a plate which helped bring me back to life.  It was memorable.

David decided to go out of town for the weekend and I just prayed I would survive.  I mean I was thinking is it possible to survive Chemo and then die from a  cold? That would be tragic.

Fainting in the Grocery Store


Sunday after Thanksgiving and I needed to pick up a few things from the grocery store...like cough medicine and more tissues.  I had about 10 items on my list.  I had on leggings, a black t-shirt, felt hat (no wig) and grey hoodie.  I had the hoodie on over the hat going in the store and just decided to keep the hoodie on while I shopped.

As I was going around the store I noticed how tired I was.  I was leaning on the cart.  Not really pushing it but leaning and pushing. I got up to the check out line and was exhausted.  I remember taking one thing out of the cart and then the cashier helped take everything else out.  I was grateful.  Then I watched as he started to scan the items.  I felt like he was moving in slow motion. I was thinking OMG I'm not going to make it. I took out my store card and the money I thought it was going to cost and put it on the counter. All of a sudden I got SO hot.  It was the same type of hot that I felt during the MRI the week before.  I took off the hoodie and put it and my purse on the empty counter. I remember thinking I need to put my head down.  So I put my head on my purse...

...the next thing I heard was "Ma'am, Ma'am are you alright?"  I was on the floor. I had fainted.  All I thought was "Oh Boy! This is bad!" She called 911 but in the meantime there were some fire department guys shopping and they came up to check me out. I looked up at the manager who I knew because I went to that store often and she was asking me if I was alright and telling me that I had fainted. I told her I was alright.  She said she couldn't let me drive like this and needed to call 911.

They took my pulse and it was low...I can't remember how low but he said it was low.  Temperature was okay and blood pressure was high.  So they talked to me and asked me what happened.  I told them I was a cancer patient and just got overheated. They asked for my ID...name and address ( I thought that was strange).  Then they asked for my SS# and I told them I didn't feel comfortable giving it to them. So they said okay.

They asked me to stand up so they could take my pulse again.  I got up and was a little dizzy but okay.  They checked my pulse again and it as boarder line okay.  By this time the ambulance was there and they were coming in the door.   I overhead the firemen talking to the ambulance guy and told him that I checked out and it was up to me if I went with them.  Perfect. So I got myself together answered the ambulance guys questions about how I was feeling and if I felt okay to drive.  I said I was okay.  They said I could go but needed to verify my information...name, address and SSN.  I asked why they needed my SSN and they said it was part of their reporting.  It looked more official because the guy had a handheld unit he was entering the information into.  So I gave him the SSN.  My goal was to drive myself home and figure out what had happened to me.

There was a REASON they needed my SSN...so they could BILL MY INSURANCE company. APPARENTLY there is a cost for emergency service EVEN if you don't take a ride with them. Here it is....


I don't know why I find this INSANE. I knew there was a $500 fee for transport but there is a $125 fee if they just come out and check you out.  Another reason to run for political office.


I didn't immediately go the the emergency room.  I went home.  Ate something. Rested and went to sleep.  I thought I would be able to make it until Monday morning and go to the doctor. That didn't work out.  I woke up about 5 AM and felt DIZZY...like I'm going to faint again dizzy.  I called the number the oncologist gives you to talk to the on-call doctor.  I told him what was happening and he told me because my pulse (heart) was low I needed to go to the emergency room and get checked out. 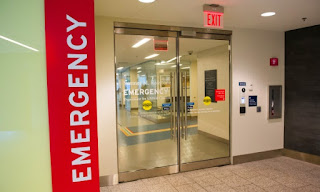 I got dressed and went to the nearest emergency room. It happened to be an emergency room near the Oncologist office and it was COMPLETELY empty.  No one waiting.  Like a skeleton staff on duty.  I tell them I need to be seen and can barely stand up. They call for triage and take my vitals.  I can't remember what they were but they wheeled me back to a room pretty quickly.

The doctor came in and asked a bunch of questions and then told me they would be checking my heart, checking if I had the flu or pneumonia and doing blood work. Great...let's get to the bottom of it.   They put me on IV with fluids and I started to feel a little better.  Then they checked my heart and it was fine.  I got a chest x-ray and they checked to see if I had the flu (that hurt!) apparently I've never had that done before...someone sticking a long q-tip up your nose.

I waited for about an hour to get the results. I did not have the flu.  I did not have pneumonia BUT I had problems with my electrolytes specifically my potassium was too low.  It was so low they needed to give me potassium intravenously.  They told me it would take an hour to administer but I should feel better and be okay. This made sense because after each chemo treatment on the AC drugs the doctor would prescribe Potassium bills but with the final chemo there was no final check of my levels....there probably should have been.

The emergency room doctor said I should be fine now and let me go home.  I didn't instantly feel better.  I still had the cold.  I was still weak but I didn't feel like I was going to faint anymore.

Whew...close call...
P.S. After learning about COVID-19 I think this is what I had!
Posted by Maria Williams "Ridea Richardson"
Email ThisBlogThis!Share to TwitterShare to FacebookShare to Pinterest
Newer Post Older Post Home