I had an appointment with the surgeon as a post follow up to surgery. When Dr. Times walked in the room he said: "I understand that you already have the good news."  I told him that I had because the oncologist had told me that all the cancer was gone prior to surgery and that only scar tissue remained. The surgeon also confirmed that no lymph nodes were involved.

This was all great news. The best!

I thanked him and told him he was awesome.  He asked me to let the oncologist know the he thought she was awesome because her regiment of drugs had successfully killed the cancer. I told him that I will and I will! I'm so grateful to both of them...so grateful!

He examined me and we talked about the scar and soreness that I still felt in my arm and chest. He said it will eventually go away. I asked him about the documentation that I needed to return to work and they provided it. 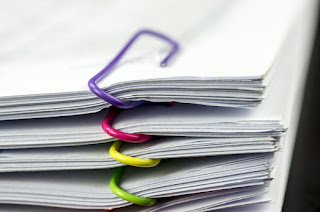 What a process...
I started pulling together the documentation that I needed to return to work which included a Return to Work Authorization from the Oncologist, all the hospital notes (about 100 pages at .05/page); oncology notes,  radiology notes, surgeons notes.  It is a massive amount of information.

I called Prudential Insurance to  let them know my return to work date and called the Leave of Absence Administration.

Again...what a process... but I'm on my way back to normalcy.
Posted by Maria Williams "Ridea Richardson"
Email ThisBlogThis!Share to TwitterShare to FacebookShare to Pinterest
Newer Post Older Post Home